MOSCOW — Dubbing itself as “radio’s most popular Russian newspaper,” one of Komsomolskaya Pravda‘s main goals is to nurture its relationship with its audience. In line with this philosophy, the Moscow-based public broadcaster decided to go visual. In 2017 Komsomolskaya Pravda upgraded its studios with a multiCAM RADIO automated visual radio and productions system.

The station targets 35- to 50-year olds with a business/talkshow format. Live Director, Aleksey Epifanov, said they decided to add visual radio because their listeners wanted to see what was going on in the studios. “Visual radio was not a luxury for us but a necessity — our audience wants to see our presenters and guests, not just listen,” he said.

Then a station delegate discovered multiCAM systems during a trip to the IBC show in Amsterdam. He “found the equipment easy and powerful to use.” That’s when Radio Komsomolskaya Pravda officially took its “visual” leap. Shortly thereafter, the station began using Russia’s first multiCAM visual radio and production solution.

Komsomolskaya Pravda broadcasts nationwide via more than 60 regional offices and relay stations. It entertains listeners with interesting guests and discussion around the hottest topics. Between the talk, the station airs a variety of music. This includes various tracks, both popular and less well known.

The broadcaster has two studios. It uses multiCAM RADIO to record and stream shows from its on-air studio to website and social media. It placed four PTZ mCAMI cameras in the main studio and one camera in the second (backup) studio.

multiCAM RADIO integrates with an Axia Element console and Digispot II playout system and automatically controls the SDI-connected cameras. The system detects who is speaking and automatically switches the camera to capture the best angles. It also does cutaways to other speakers, and creates new shots to make the visual radio show look professional and natural.

As part of its approach, the station makes use of dynamic graphics to enhance its program offering. The system lets staff effortlessly edit and directly publish to YouTube and Facebook. They can also reframe camera shots and personalize automated graphics. In addition to the four cameras feeding the system, a computer allows for the quick ingest and easy sharing of Skype calls and other information.

According to Epifanov, because this was the first multiCAM system in Russia, they didn’t have on-site training at the time. But, he says, the learning curve was so small they didn’t need it.

“multiCAM was very responsive and immediately answered any questions that arose,” said Epifanov. “We were like pioneers here and knew the ‘adventure’ would pay off for us.”

He adds that integrating the system with the gear they already had was a breeze. “The setup was easy. We quickly discovered that with multiCAM RADIO, we didn’t need many people to produce excellent video broadcasts,” he said. “multiCAM RADIO takes care of routine processes and frees up time for other tasks.”

Epifanov explains that the multiCAM system has brought the station closer to its audience. “The addition of video has greatly improved our relationship with our audience and it has helped us develop our social media efforts,” he says.

“In addition, the accessibility of the system was a great surprise — we now create engaging and high-quality video with just one staff member. Today multiCAM RADIO is an important part of our strategy to reach, maintain and grow our audience.” 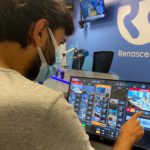